In 1904, several sea chests filled with treasures arrived in Kristiania from Siam, today’s Thailand. Captain Theodor Ring had collected 250 pieces of colourful Bencharong porcelain, during his service in the Siamese navy.  Now he wanted to give his collection to two museums in Oslo. 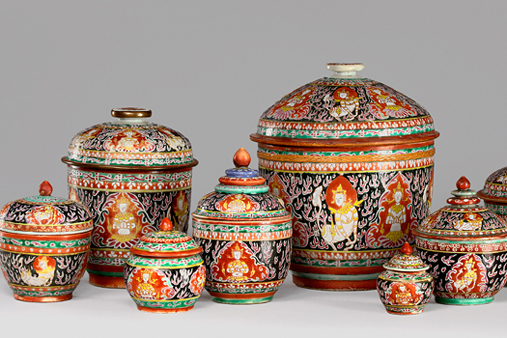 Bencharong porcelain was made in China, used in Thailand and decorated with motifs from Indian mythology. Photo: © Museum of Cultural History/Kirsten Jensen Helgeland

From Friday, 22nd November you can experience an exquisite and colourful collection of porcelain from Thailand, donated to the museum in 1904 by naval captain, Theodor Ring.

Forgotten for generations, Captain Ring’s gift has again been unpacked and will now be displayed in a small, but beautiful exhibition on the 2nd floor landing of the Historical Museum. The exhibition tells the story of Bencharong porcelain, from its journey from China to the capital of Thailand in the 1700- and 1800’s, to its present home in a Norwegian museum. The word Bencharong comes from Sanskrit and means “five colours”. The porcelain, which usually had more than five colours, was commissioned by the kings of Thailand. Bowls, cups and plates were used to serve food, as water containers, and to hold cosmetics. Bencharong is known for its lush floral patterns and mythological figures depicted in vivid colours. Their rich history bears witness to the creative meeting of ideas, cultures and peoples over several hundred years.

Of exceptional size and quality

In 2006, Rose Kerr, the well-known porcelain expert from the Victoria and Albert Museum in London, paid a visit to the Museum of Cultural History. Here, she found a collection of ceramics hidden away in museum storage. This, she noted, was a collection of “exceptional size and quality, unmatched in most museums”. Captain Ring had divided his collection between two museums; the Museum of Decorative Arts and the Ethnographic Museum, the latter receiving the greater share (200 pieces). Ring and his wife Maggie, kept a number of pieces, still in the possession of the Theodor Ring family. The exhibition presents pieces from both museums; the Museum of Cultural History, which now houses the former Ethnographic Museum, and the National Museum of Art, Architecture and Design, of which the Museum of Decorative Arts is now a part. On display are other objects Ring gave to the museum, as well as pieces of Bencharong collected by another Norwegian explorer who toured the East, Carl Bock (1849 – 1932)

Theodor Peder Amundsen Ring was born in 1866 in Solør, northeast of Oslo. He attended the Naval Academy in Horten and graduated a Second Lieutenant in 1887, at the age of 21. He was at sea for ten years, before joining in the Royal Siamese Navy in 1897. From the mid 1800’s, the kings of Siam had taken measures to modernize the country. This was partly an attempt to avoid the fate of its neighbouring countries, which had become colonies of Britain or France. Foreign experts played an important role in this strategy, especially those employed in the military and transportation sectors. 16 Norwegians took employment the Siamese Navy. From 1868 to 1910 the country was governed by King Chulalongkorn, celebrated in today’s Thailand as a progressive ruler with almost saint-like qualities. The king visited Norway in 1907, and during a dinner at the royal palace, Theodor Ring had the opportunity to greet both King Haakon and his former employer. King Chulalongkorn published a book about his three week stay in Norway, called “A long way from home”.  The small Chulalongkorn museum at Nordkapp commemorates his visit.

Theodor Ring must have developed a taste for collecting from an early age. In a letter, he admits to breaking off a piece of the Gokstad ship when visiting the exhibition as a young boy. Ring ended his service in the Siamese Navy in 1906, but took up residence in Penang on the Malayan peninsula with his family from 1913 to 1921. He died in Oslo in 1932.

The curator of the exhibition is conservator Anne Håbu. The exhibition has been made possible with the help of Ambassador H.E Mr. Theerakun Niyom and The Royal Embassy of Thailand in Norway.

The exhibition will be accompanied by a book entitled, «Royal Porcelain from Siam. Unpacking the Ring Collection», published by Hermes Academic Publishing, and edited by Anne Håbu and Dawn Rooney. The book contains contributions from international experts on Thailand and Bencharong, and is illustrated by beautiful photographs of the collection taken by the Museum’s photographer, Kirsten Jensen Helgeland.

The book provides a general presentation of Bencharong as well as new insight into its nature, history and use, written by some of the leading scholars in the field. Similarities and differences between chinaware exported to Thailand and to other countries in the region are among the topics that are discussed. From which sources has Bencharong derived its unique design? What is the status of this porcelain in Thailand today?

The book provides a general presentation of Bencharong as well as new insight into its nature, history and use, written by some of the leading scholars in the field. Similarities and differences between chinaware exported to Thailand and to other countries in the region are among the topics that are discussed. From which sources has Bencharong derived its unique design? What is the status of this porcelain in Thailand today?

The Ring collection of Bencharong receives special attention. In addition, other antiquities in this collection are examined. Some articles also focus on other Norwegian collectors of oriental arts and ceramics. What were the collectors’ backgrounds and their motivations?

This publication will be of special interest to scholars and students of oriental ceramics as well as all those fascinated by Thai art and culture. A wider audience will also be attracted by its colourful illustrations and little known stories behind these beautiful museum objects.

"... a long-needed contribution to the study of this exuberant ceramic tradition."

"... a publication that appeals to both scholars and general readers."

The book is distributed in Thailand by River books  http://www.riverbooksbk.com