Visit the exhibition De Te Fabula Narratur will during the Oslo Pride festival! 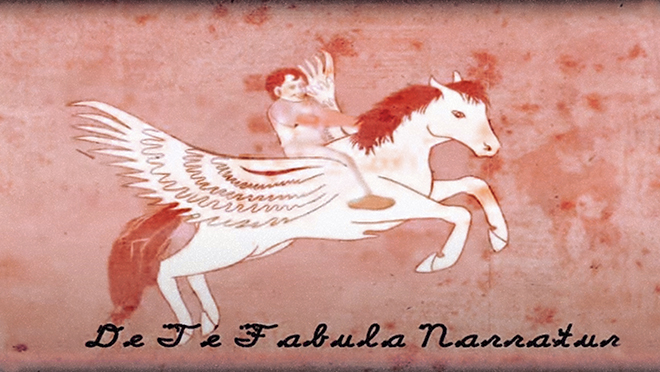 watch artist Maria Sundbys charming presentation of the history of Ole Troldmyr further down on this site!

Queer lives and stories have been kept secret and invisible by society for ages - something that still happens in large parts of the world. The stories in this exhibition have in common the desire to make a safe space. A place you can be yourself. Art can act as a mirror image of life and love, and the vulnerability that comes with it.

18th-century England did not look with kind eyes on homosexuality, either socially or legally. Anne Lister (1791-1840) from Halifax challenged prejudice and is regarded today as a modern lesbian icon. Although in the 1920s it was punishable to be gay in Norway, Ole O.Troldmyr (1888-1967) held fabulous parties in his villa in Holmenkollen. The condom manufacturer's life was full of secrets and mysteries. In Norway in 2020, there is good visibility and acceptance in the society around gender and sexuality diversity, but LBHTI people in many countries in the world still experience a great deal of discrimination and oppression.

Anne Lister (1791-1840) from Halifax in England is considered by many to be the 'first modern lesbian'. Anne wrote diaries from 1806 to her death in 1840 and covered every aspect of her life as a landowner, businesswoman, traveller and lesbian. From the age of 26, she wrote systematically in her diaries every day. Her diaries consist of 7,720 pages or about 5 million words, with about one-sixth of the entries written in a code she created herself.

In 2011, Anne's diaries were written into the UNESCO UK Memory of the World Register to recognize their significant cultural significance. The diaries are an important resource in gender studies and women's history. In 1939 Anne Lister and her girlfriend Ann Walker visited Norway, and in the exhibition room in 2021 we get an insight into their journey through Lister's transcribed diary notes.

Hamid Waheed is a multimedia artist currently living in Oslo. He works primarily with moving images, as well as text and performance. In his work, he places special emphasis on absurd and disjointed characters. The absurd and disjointed is also a method and approach to investigate social and informal structures, often with a link to history and archival material.

Director Ole O. Troldmyr has for a number of years inspired artist Maria Sundby. Since she did her thesis at the Academy of Fine Arts about him in 2008, she dug into his life and life with good help from Skeivt Arkiv. Ole O. Troldmyr (1888-1967) was gay at a time when it was unusual to be as open-minded as he did. He was a keen businessman and owned several large properties, among others a

huge villa in Voksenkollveien in Oslo. The main floor of the main house was decorated as banqueting halls with expensive tapestries, crystal chandeliers and lamps and rare decorative objects. On one of the doors to the house was a Pegasus with a boy riding his back. Under the drawing it was written De Te Fabula Narratur.

At the Historical Museum in 2021, Maria Sundby plans to recreate the atmosphere Ole Troldmyr lived in; the rooms, the people, the cultural diversity and the secret stories.

On a small islet in the Bjørnsjøen in Nordmarka, the two men Harald Tidemand and Ivar Nederberg made their own private holiday paradise in a time when homosexual cohabitation was impossible, from 1938 to 1959.

The curation of the exhibition is site-specific to the room's design, color and aesthetics. It will be a personal, subdued and fabulous exhibition with merging artistic and fabulously stories, which opens at the Historical Museum in June 2021.

Contemporary artists and curators highlight anecdotes, bits of their own, and others' lives. It looks backwards, forwards and sideways - and it creates the feeling that the stories that unfold could just as well be about you.

Contemporary artists who are invited to produce works for the exhibition

See stories about these people