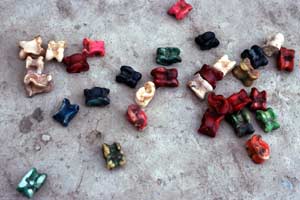 Raskolnikov went out of the shack and right down to the bank, sat down on some logs lying there and stared out over the wide and desolate river. The bank was so high that he had an extensive view of the surroundings. From the other bank far away there came the almost inaudible sound of a song. Out there on the vast sunlit steppes he could just make out some small black dots – they were nomad tents. There he saw freedom, there lived other human beings quite different from those who lived here, there even time seemed to stand still as if it were still the days of Abraham and his flocks (Dostoyevsky 1989: 485. Translated from the Norwegian version).

Dostoyevsky, Hedin, Fleming, Golowanjuk, Torvik, Scherfig and Ajmatov, to mention a few, all described the life of the Kyrgyz on the Kazakh steppes or in the high Kyrgyz mountains. In practically all the descriptions the free, nomadic lifestyle of the Kyrgyz is described. These descriptions often draw a picture of the Kyrgyz man living together with his closest family in a yurt far away in a remote part of the mountains or out there in the middle of the barren steppe.

It will soon be a century since the Kyrgyz had a nomadic lifestyle. Modern Kyrgyz people are highly educated and have fixed abodes in a world in which mobile telephones and computers are normal equipment at work. Nevertheless it may be argued that most Kyrgyz people have some kind of relationship to the objects that are being put on display at this exhibition. The objects are thereby of the present at the same time as they represent a long historical tradition.

The tragic events in New York in the autumn of 2001 have led to the fact that the international searchlight has been turned in earnest on Kyrgyzstan and the nearby areas of Central Asia. After long discussions between the Kyrgyz authorities and the western powers with the USA in the forefront, the way was opened for a western military presence in the region. A large number of military personnel, including a contingent of approx. 70 Norwegians, are stationed in the vicinity of the Kyrgyz capital. Such a presence naturally has both negative and positive sides. There will certainly be some conflicts between local people and newcomers. There is, however, absolutely no doubt that the element of personnel from the western states will lead to increased political and economic contact between the states involved. This may in its turn lead to an increase in tourism, trade and cultural exchange.

The planning of the exhibition “Kyrgyzstan – Land of Felt at the Centre of the World” had been going on for several years. The political events of the past year have nevertheless brought about a situation in which this exhibition is now more relevant than at any time previously. Our hope is that the exhibition may contribute to establishing a positive impression of, and an increasing interest in, a region that has a great deal to offer when it comes to material culture, history, everyday life, the natural environment and music.

Se the exhibition web page in its original version