Orhan Pamuk: The Art of Fiction

Orhan Pamuk: The Art of Fiction offers a unique journey through Orhan Pamuk’s authorship, with The Museum of Innocence as the focal point. This is the first international exhibition highlighting the Nobel laureate’s  role both as a writer and an artist. 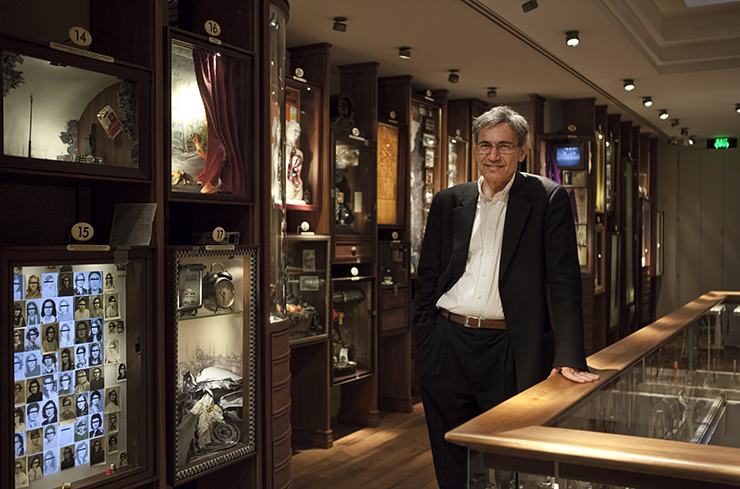 Orhan Pamuk in the Museum of innocence in Istanbul. Photo: © Innocence Foundation and Refik Anadol

Orhan Pamuk’s critically acclaimed novel The Museum of Innocence is both a classic love story and an ode to Istanbul. On its most basic level The Museum of Innocence is the story of Kemal who falls so deeply in love with Füsun that he becomes obsessed with collecting objects that remind him of the time they spent together before fate would tear them apart— not only once but twice. These objects are spun into a nostalgic and sentimental story that also paints a vivid picture of Istanbul from the 1970s to the early 2000s.

A book about a museum, or a museum about a book?

The Museum of Innocence is neither a book about a museum, nor a museum about a book. These are rather two sides of the same story; one told through words, the other expressed through objects. As such, an epic tale of love, an ode to Istanbul, and an unprecedented work of art come together to reveal the full potential of the relationship between words and images, literature and art.

Extract from The Museum of Innocence

On arriving in a new cityI would move into the old but comfortable and centrally located hotel that I had booked from Istanbul, and armed with the knowledge acquired from the books and guides read in adcance, I would begin my rounds of the city’s most noteworthy museums, never rushing never skipping a single one, like a student meticulouslycomleptin an assignment. And then I would scan the flea markts, the shops selling trinkets and knickknaks, a few antique dealers; if I happened on a saltshaker, an ashtray, or a bottle opener identical to one I’d seen in the Keskin.

From The Museum of Innocence, translated by Maureen Freely, Alfred A. Knopf/Random house, 2009.

Twenty-nine vitrines from The Museum of Innocence in Istanbul

The exhibition features twenty-nine vitrines from The Museum of Innocence in Istanbul. Each vitrine consists of a selection of carefully composed objects that reference specific chapters in the novel The Museum of Innocence.  The vitrines are complemented by historical film footage, family photographs, a sound component, and an interactive video presentation of Orhan Pamuk’s notebooks filled with texts and watercolors. The Art of Fiction also features twelve original Japanese or accordion notebooks filled with words and images, which have never been presented or published previously. These serve to emphasize the importance of Orhan Pamuk’s role as a visual artist. In fact, he dreamed of becoming an artist until the age of twenty-three when “a screw fell loose” and he decided to become an author. Although Pamuk went on to become an award winning author the artist inside him never died.

Free audioguide in your appstore. For Google Play, write "artoffiction" in one word.
The audioguide is also available online at www.1213.myt.li

On 11 September the museum organizes the seminar The Art of Fiction – In the Museum on Orhan Pamuk's Museum of Innocence and his vision for museums. Download the program.