This exhibition explores the relation between fashion, luxury, craft, wealth, consumption and poverty in India. 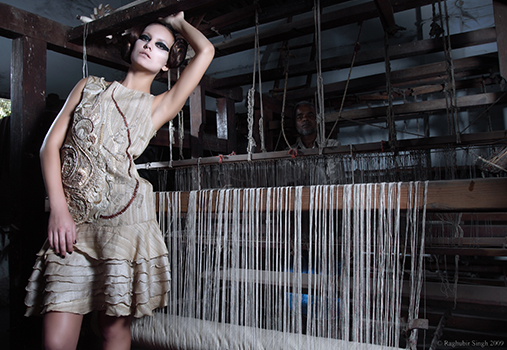 ‘I want this funeral to be spectacular! Manish darling, you have to design some fabulous embroidered dresses for us and change the interior, we need controlled opulence, luxury and modesty in one, lots of white! It is all about business, you know that darling!’

Anjali’s uncle was still fighting against cancer in the hospital, while she already began planning his spectacular funeral together with one of India’s leading fashion designers. Wealthy businessmen, politicians and celebrities were invited a day before her uncle’s death. The carefully designed funeral ‘festivities’ spanning over a week had to manifest the power, status and wealth of the family. Business deals worth millions were sealed.

The designer dress that Anjali wore was handmade in Lucknow and took six girls more than five months to embroider. Anjali wore it only once. The dress cost more than a 5 year salary of one of the embroiderers.

India is often imaged as consisting of two parallel worlds – of the worlds of the poor and the rich or middle class. In reality, however, these two worlds are profoundly dependent on one another. One cannot exist without the other. The rich perpetuate poverty in order to satisfy their needs, while the poor have to find ways of surviving, depending on the scraps from the rich’s table. Nowhere is this more visible than in the emerging Indian fashion industry.

After the neoliberal reforms of the 1990s and the opening up of the market, Indian fashion industry, modelled upon its western counterpart, began taking shape. However, as opposed to western fashion that is all about cuts, the unique selling point of Indian fashion is handicraft and embellishment. Therefore, Indian fashion designers depend on the labour and creativity of millions of India’s craftsmen. Paradoxically, while the craftspeople are celebrated as India’s living heritage and their crafts become symbolic of the nation and Indianness, the credit for the fashion pieces goes to the individual designer, the artisans remaining impoverished.

Projecting an image of a 'new' India

This exhibition explores commodification of culture, heritage, past and the living bodies of craftspeople set within the context of identity politics of contemporary Indian elite that tries to project an image of a ‘new’ India, a global power confident in its Indianness. It also uncovers bits and pieces of the logic of spectacular capitalism, of the mythologies of capitalism, such as the one claiming that if you work hard enough and have a vision, you can make it big no matter your background. The reality often defies this myth.

The exhibition is based on Tereza Kuldova’s doctoral thesis called ‘Designing Elites: Fashion and Prestige in Urban North India’ and research conducted between 2010-12 in Lucknow and New Delhi. The thesis followed traditional hand embroidery from its production in Lucknow, via collaborations with Delhi-based fashion designers to its consumption by Indian elite clientele, thus throwing light on an anthropologically understudied phenomenon of fashion.

What have the contemporary Indian spectacular fashion shows in common with the Western nineteenth Century Department store fantasy Palaces, the royal durbars, the elaborate museum displays of the colonial era and the lives of erstwhile Indian Royals?

What can the Delhi International Airport reveal about the current obsession of Indians with Indianness, the 'local' and the refashioning of India for the global audience? How does the 'royal chic' - the current trend in luxury Indian haute couturethat recreates the splendor of the aristocraticlifestyles of the bygone era - depend on poverty for its Visual and material existence?

Why does the Indian government invest in the Northeast Indian fashion scene and into the Production of ethnic glamour and tribal chic? How do the glamour seeking Kerala Muslim women appropriate the sexy Bollywood fashions while still retaining their codes of modesty? How do the world of Delhi and its fashion designers look from the perpective of the village craftswomen that work for them, mock them and laugh at them and their hectic life? What is the science and the artisanship behind the production of traditional Kolhapuri sandals, turned into luxury items for the international consumer? Finally, how do Bollywood cinema and the changing male fashion and body ideals reflect the transforming India?

This Anthology, written by an international Group of anthropologists With hands-on experience from India and its multi faceted fashion industry, explores the underlying dynamics of spectacular capitalism. The authors present a range of intriguing case studies that open up the  potential for critique of the local as much as global system that reproduces hierarchies and inequalities, while providing us a window into contemporary urban India.