Our exhibition contains some of the most exquisite objects that we have from the Norwegian Viking Age. Become acquainted with Viking war culture and their journeys, and how society changed during the Viking era. 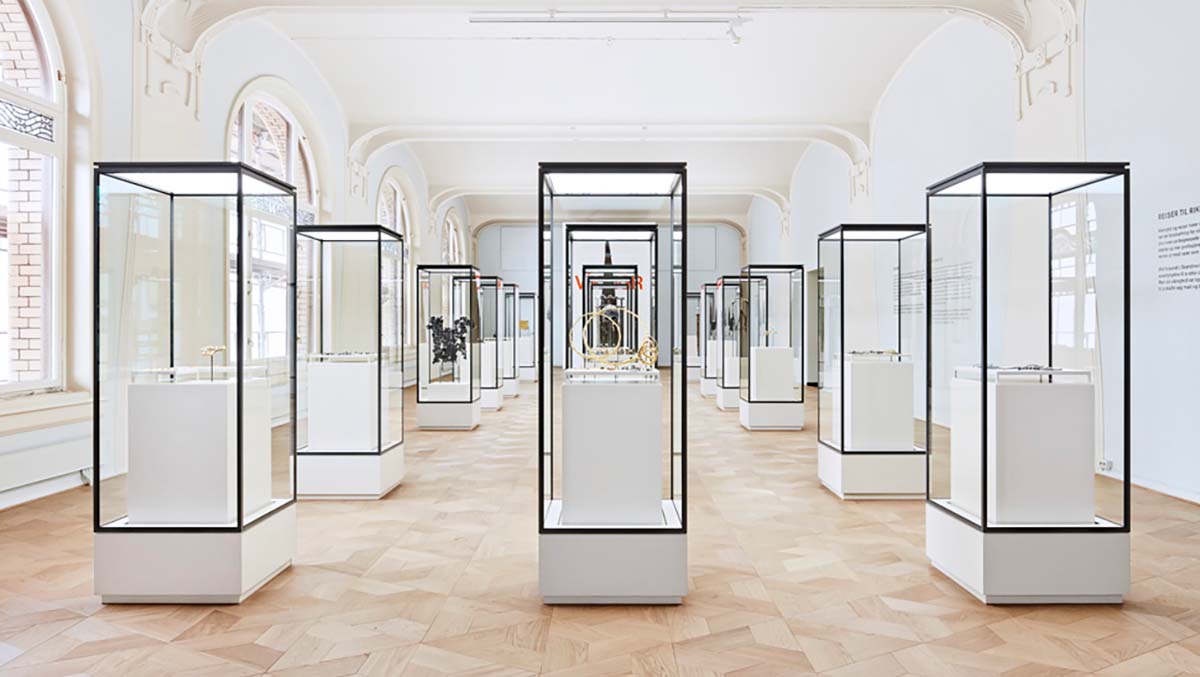 The exhibition was designed by Snøhetta. Photo: Calle Huth.

The Vikings are known as being violent and ruthless warriors. However, they were also farmers, skilled craftsmen and traders. On display at the VÍKINGR exhibition you will find familiar and exquisite artefacts representing different aspects of life, death and society.

The exhibition portrays three important aspects of the Viking Age: journeys, warriors and a changing society.

In VÍKINGR you can see some of the most exquisite objects found from the Norwegian Viking Age. Join Professor Marianne Vedeler on a tour of this unique exhibit, designed by Snøhetta.

The Viking Age encompasses the period extending from around 750 to 1050 AD, a time when people from Norway, Sweden and Denmark travelled out into the world in great numbers.

During their numerous journeys to the west, south and east, the Vikings came into contact with people in new ways, returning home with riches and new ideas. The exhibition contains gold and silver treasures from distant shores that have been found in Norway.

The Vikings also set up new trading posts where foreign traders could import goods. At the same time the Vikings exported their own jewellery, weapons and customs to the outside world.

Their journeys and Viking ships are favourite motifs in both the Norse sagas and modern narratives about Viking Age society. However, the journeys of the Vikings and their meetings with other cultures and societies also helped to form the basis of the major social changes which took place during the period.

The Vikings are perhaps primarily known as being warriors. Arriving by sea in their large ships, they have been portrayed as being fearless and brutal. Swords and axes were buried with their owners, and many of these weapons were exquisitely crafted.

Beautiful Viking Age swords decorated with precious metals and intricate ornamentation illustrate the symbolic power that was associated with such weapons. Symbolic acts of violence and images representing idealised violence and war show that these were important aspects of society for both men and women. Did they really have female warriors? In this exhibition we present a female who was buried with the accoutrements of war.

The Viking Age was a period of major upheaval. Society was opening up to the world, and a transformation occurred in religious beliefs, the economy and the organisation of society. An intense power struggle between minor kings and nobles culminated in the Unification of Norway and the emergence of a completely new economic system. At the same time old religious ideas were forced to give way to new concepts and the country gradually became part of Christian Europe.

During an archaeological dig in Setesdalen in 2011 a sword was discovered which was decorated with mystical signs inlaid with gold.

A hilt embellished with signs and an inscription was extremely unusual during the Viking Age and we are still not sure what the letters mean. Some of the signs are inverted while others are written sideways. The letters could be references to verses from the Bible or prayers, or copies of characters on Anglo Saxon coins. One theory is that the sword was brought to Norway from England.

The numerous crosses on the hilt depict Christian motifs, as does the portrayal of a hand holding a cross. This sword bedecked with Christian symbolism was finally placed in a heathen grave. The exceptional Langeid Sword speaks to us of journeys, warriors and a time when the world of the Vikings was coming to an end with the advent of the Christian Middle Ages.

Vikingr is the Norse word for Viking and it was used by seafarers, maritime warriors and long-distance travellers. Today the word vikingr is used to describe anyone with Norse origins who lived during the Viking Age.

In a few years time the Norwegian Museum of Cultural History will be opening a new, fantastic museum building which will be an extension of the present day Viking Ship Museum on Bygdøy. This exhibition contains some of the numerous artefacts which will be on display in the new museum when it opens. The exhibition has been designed by Snøhetta.