In 1904 the Historical Museum opened its doors in Tullinløkka. The architect behind the University's new museum building wanted to provide its employees and visitors with a complete experience of a composite work of art, based on both modern European architecture and Norway’s golden age. The result was the subject of considerable criticism. Until today. 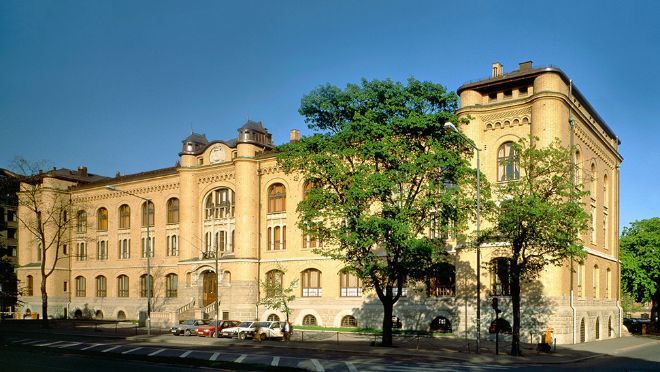 Henrik Bull was in the process of completing construction of the National Theatre when he took over the Historical Museum project. The winner of the original architectural competition had already drawn up the conditions for the location and design of the building. However, Karl August Henriksen died before construction could begin. The project was transferred to Bull, one of the city's most celebrated young architects.

When the actual building was completed in 1902 it was one of the most modern buildings in the Norwegian capital.
It was not just modern because it was new and fashionable. It had also been designed as an Art Nouveau building, a style that many architects thought would replace the 19th-century passion for earlier styles. Art Nouveau was symbolic of youth and modernity, but it also bore characteristics from the past. Nature was the main inspiration. While Franco-Belgian Art Nouveau specialised in sinuous lines and asymmetry, the Austrian, German and Scottish styles were more characterised by geometry and symmetry, and these provided the main inspiration for Bull’s work. However, there was a strong nationalist movement in Norway at the end of the 19th century. Bull himself was very interested in old Norwegian building customs and monuments. Since the building was to be a national treasure for the Norwegian people, he naturally allowed himself to be inspired by Norway’s own styles.

Both inside and out, the museum was decorated with ornaments that were inspired by wood carvings dating back to the Norwegian Viking Age and the Middle Ages. Dramatic dragons, masks and mosaics were intertwined with the international Art Nouveau style to create something completely new. Bull’s symbol of knowledge, the owl, was also a recurring theme. In addition to Norwegian antiquities, the museum would also house the numismatic and ethnographic collections, all of which were to be moved across from the university buildings on Karl Johans gate. He was able to happily combine his love of Old Norse-inspired masks from the dark, distant past with exotic, distant contemporary cultural items far removed from brighter civilisations. The whole building became an example of the idea whereby buildings and their contents form a cohesive whole where the public can both experience and acquire knowledge and simultaneously make the right associations. The wall sections of the museum rooms containing Norwegian antiquities were originally painted with landscapes in order to enhance the Norwegian aspects of the items on display. However, the roof vault above the stairwell was decorated in the gilded Viennese Art Nouveau style, although there were a few dragons lurking in the bannisters.

Modern architecture has always created a stir. One Aftenposten critic called the Historical Museum a Warehouse resembling a barracks, while one professor of architecture said that the architectonic decorations looked like pigs wearing morning coats. People were also not impressed by the fact that the main material used in the façade was imported yellow brick. Furthermore, the problem with Art Nouveau was that it quickly became unfashionable. During the functionalist era in the 1930s, the museum was described by one leading art historian as being a wart on the face of Oslo. Inside the museum, Bull's showcases were thrown out and the chandeliers were sent away to be melted down. The décor was regarded as being disturbing. Over time, however, the Historical Museum has been re-discovered by the world. Articles about the building have appeared in French Vogue and other international magazines. Tourists gasp at the beautiful details and materials, and at the quality of the work undertaken by the craftsmen which evokes ecstasy and ornamentation that is both redolent of Norwegian exoticism and European art history - all at the same time. The Technical Department has now completed the restoration and replacement work, and hopefully in time several of the lost items of furniture will be returned to the museum.

Henrik Bull himself continued his success with new buildings such as the Government Building and the current residence of the American Ambassador. On the other hand, nothing came of his Viking Ship Museum in Tullinløkka, but by that time the architect had already designed yet another Norwegian classic, Lohengrin chocolate. And that's probably a strong, sweet, joyful legacy for a university architect, isn't it?

Would you like to see more photos of the Historical Museum?

Please click on the photo in order to see the whole gallery.